Tattoos symbolize self-expression, rebellion, art, and at times stupidity, too! Our favorite actors are no strangers to the art of tats.

Be it influenced by the loved ones’ names, symbols, art, numbers, portraits, heritage, literature, or nature, we have seen a whole lot of it tattooed on actors.

Some brave choices, some moving, some questionable, some obvious, others slightly concealed, celebrity tattoos are always interesting for laymen to get an insight into their lives.

Let’s see the wall of tattoos of actors with tattoos.

Get ready for some surprises ahead. Who knows, you may find inspiration for your next tattoo.

Brad Pitt’s tattoos reveal drawings, scribblings, initials, words, and dates all over his body. Speculated to have been inked more than ten times, several of his lower torso tattoos are associated with his ex-wife Angelina Jolie. Whereas the one on his forearm reveals the initials of his family members.

This tattooed actor supposedly believes that everyone regrets their tattoos eventually, hence, his imperfect barcode on the wrist, or cactus-looking monster, and the giving tree on the arm appear doodled and adorable, and even funny. Ryan Gosling has around five permanent tattoos, out of which at least two are self-tattooed.

The young British actor got an upside-down hanging spidey tattoo on the bottom of his foot to celebrate the portrayal of his dream role. Revealed to the world during the promotions of Spiderman: Homecoming, it’s the only known tattoo Tom Holland has.

The blue-eyed actor has been caught with two tattoos. It’s been observed that Zac Efron had “YOLO” inked on his hand in 2011, which he got rid of within a couple of years. However, he was brave enough to get another tattoo of feathers on his inner arm that we have seen him flaunting.

With a whopping 30 tats, Tom Hardy is one of the most inked actors. Seen sporting elaborate art all over his arms, back, chest, and lower torso, he has his wife- Charlotte’s name and portrait on him. After losing a bet to Leonardo DiCaprio, our dude got “Leo Knows All” engraved on his arm.

Rob Lowe debuted in Hollywood in his teens. Symbolic of his wild days, he has one tattoo on his left arm. What started as a koi fish, today, the tattoo has evolved into a messy blob of randomness, which, according to the actor, represents his state of mind!

One of the iconic actors whose face has been tattooed on others is Nicolas Cage. Although not very open about his tattoos, while answering the frequently asked questions on a show, he revealed that he has about 12 tats. The Ghost Rider actor also has the character tattoo inked on his arm.

Among his 12 tattoos, the 49-year-old actor Idris Elba has tattoos on his arms, wrist, and chest. He has “One Life” inked on his arm dedicated to his father’s cancer battle. He also has the black star of Ghana on the back of his right hand as a tribute to his parents’ origin.

The wrestler turned actor who we fondly know as Drax is inked crazy. With over 30 elaborate tats all over his body, it must be a task to hide these tattoos when filming movies. To celebrate his heritage and his origins, he sports the Greek, Filipino, and American flags on his shoulders.

The girl with the dragon tattoo actor, Daniel Craig, is also a guy with countable few tattoos. This 007 actor has the letter E inked on his bicep, where ‘E’ stands for his daughter’s name Ella. He also has about four more modest tattoos on his arms, inner leg, and one at a secret spot.

For certain roles, actors need to cover up their tattoos with make-up, and that is quite cumbersome. Getting tired of this ordeal, Colin Farrell revealed that he wished to remove his tats. Except for one embarrassing “rose” tattoo, his other five tats depicted important people or events in his life.

Viggo Mortensen got a matching permanent tattoo – the word nine in Elvish with other leading members from LOTR: The Fellowship of the Ring. He also has the letter ‘H’ engraved on his wrist for his son, Henry. For his movie Eastern Promises, the actor was seen with almost 40 other fake tats.

The Thor, aka Chris Hemsworth, seems thoughtful about his tattoo choices. He’s got the initials of his family members, geometric tattoos, a rune tattoo, and a Dr. Seuss illustration on his arms. Finally, one is also the avenger logo ‘A’ inked on his torso, a matching tattoo with the other leading avengers.

Jamie Foxx got himself a head tattoo as a 40th birthday gift. The tribal tattoo that goes at the back of his head from ear to ear is rumored to have been a tactic to hide his scars which may have resulted from his hair transplantation.

The ‘Frodo’ actor from the LOTR: The Fellowship of the Ring trilogy got a matching tattoo of nine written in Elvish. His onscreen reveal of this tattoo wasn’t appreciated by fellow inked actors. The actor is also seen with a band of tattoos– firecracker, ray gun, rubber chicken, and Kaiju doodle-like on his right arm.

A man with elaborate tattoos, Dwayne Rock Johnson, wears them with pride and passion. He believes that the huge chest and left arm spanning tribal tattoo represents his journey so far and commemorates his Samoan heritage. Whereas the tiny Brahmic bull tattoo on his right arm has evolved into a more realistic bigger version.

During his young and free days, Mark Wahlberg had at least five tattoos. Distributed all over the body, his tattoos range from a religious to Bob Marley to cartoon characters to his name. But like many, he decided to leave his wild days behind and got rid of his tats.

Michael B. Jordan has one tattoo that he inked during his Black Panther filming days. The actor is seen sporting the map outline of the African continent with the Eye of Horus on the left shoulder blade. The Horus Eye is symbolic of well-being, healing, and protection in Egyptian culture.

Not a fan of his tats, Ryan Reynolds, prefers concealing his hand, wrist, and leg tattoos. He has approximately five tats, out of which the cannon on his arm is symbolic of his hometown Vancouver’s 9 O’clock gun. The one on the wrist reads ‘Know Thyself,’ reminding the actor to stay grounded.

Shia Labeouf started in Hollywood early in life and made his way into mainstream cinema as an adult. His body is indeed a canvas for elaborate tattoo art. With as many as 23 tattoos on different parts of his body, they represent various phases and events of his life.

Singer-actor Joe Jonas has quite a bit of tattoo collection on his hot body. Most of his tattoos, like the rope on his right arm, are symbolic of his family ties, while there’s one dedicated to his late dog, Waldo. And then, there are a few abstract designs in the mix.

James Bond actor Sean Connery has two known tats. Vocal about his love for Scotland, during his early naval years, he got a symbolic image and ‘Scotland Forever’ etched on his right forearm. He also inked love for his parents with another symbolic image and a ‘Mum & Dad’ tattoo.

Counting the recent ‘guiding light’ tattoo that Channing Tatum got in 2022, the actor has at least three known tattoos. The abstract-looking tattooed crossing lines on his right bicep are inspired by his ranch days in Alabama. The third one is ‘side by side’ written in Balinese that he and his ex-wife got on their honeymoon.

Another heavily inked actor to have lived and breathed is Johnny Depp. Losing his ink virginity at 17, Johnny has tattoos dedicated to his relationships, parents, grandparents, friends, heritage, kids, movies, literature, art, and the abstract! With over 37 tattoos, the ink has covered a lot of ground on his body.

This Suicide Squad actor Jared Leto has at least six known tats. You can see a lot of symbolism in his tattoos. Except for the text that reads ‘Provehito in Altum’ on his chest, the rest of his tattoos are geometric symbols that represent his band- ‘30 seconds to Mars’.

Let’s just say that Ben Affleck has a slightly colorful and edgy taste in tattoos. Whether it is the extravagant phoenix rising from the ashes on his back, the barbed wire & cross on his right shoulder, or a floral cross on the right bicep, it does raise a lot of eyebrows.

Another actor with a relatively wide collection of body tats is Justin Theroux. The huge back tattoo is a dedication to his late dogs and their prey. Whereas the swallow on his legs represents love and loyalty. He also has the letter X tattooed, which denotes the punk rock fandom.

Truly aesthetic, Jason Momoa has at least six visible permanent tattoos of his own. The most adorable of his tats is the one with his kid’s signatures on his left pec. The other eye-catching tattoo is the elaborate and symmetric wrist-armor resembling tattoo- the Hawaiian family crest on his left arm.

The suave, stylish, and talented Robert Downey Jr. is one of our favorite actors of all time. Out of the three tattoos, besides the Avenger’s special A6 tattoo, which the actors got inked together, the Iron-Man star has his son’s and his wife’s names tattooed on each of the biceps.

The craze of the phenomenon that is Justin Timberlake is worldwide, with his fans tattooing his face on their bodies. Speaking of the raved singer, he has a couple of religious tats on him. He has a few other symbolic tattoos on his legs dedicated to music.

Wary of the painstaking task of hiding the tats in movies, Chris Evans has ink at strategic locations on his body. He’s got tats dedicated to his siblings, mom, friends, and his ‘Dodger’ the dog too. Like RDJ and Chris Hemsworth, our fav Captain America also has the ‘Avengers’ tattoo on him.

From his tattoo collection, we can see that Jon Bernthal’s tats are a result of thought and consideration; dedicated to his wife, dog, and beliefs. Besides a portrait commemorating the memory of his late dog, the Walking Dead actor has the Russian translation of ‘Truth’ inked on his back.

The macho actor has an equally grand tattoo inked that span both his shoulders and back. The world was surprised to find that the colorful tattoos were real. Dedicated to his family, he’s admitted that they also serve the purpose of hiding his injuries from his Rocky and Rambo days.

The actor who brought Breaking Bad’s Jesse to life has all our sympathy for his character. Unlike his character’s wild tats, Aaron probably has only one tattoo. As a memento of the last day of filming Breaking Bad, he got the phrase ‘no half measures’ inked on his inner biceps.

Neil Patrick Harris’ showmanship is known to the world. Actor, singer, performer, magician, voice artist, his credits go on and on. As far as his tattoo world goes, he got his first-ever tattoo to celebrate the revival of his Netflix series A Series of Unfortunate Events for a second season. Half Sleeve Tattoos For Men 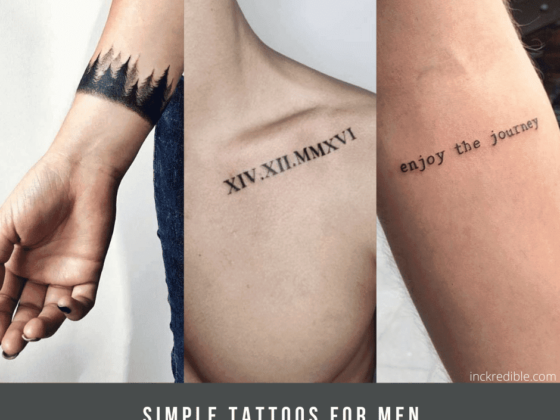